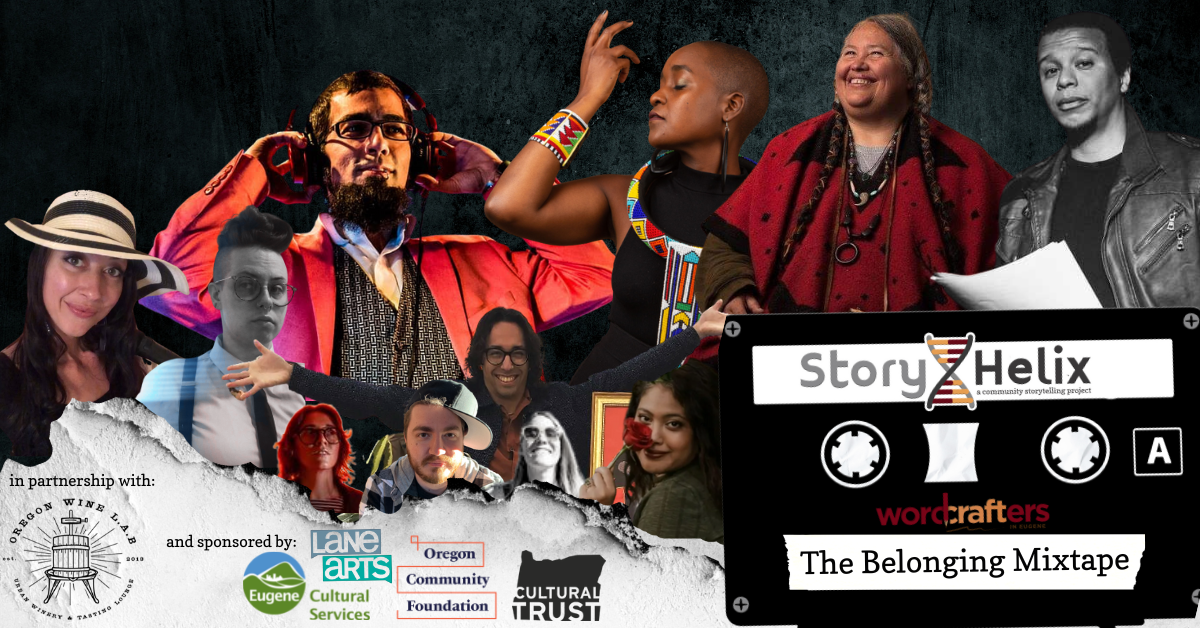 Last Friday from 5:30-8:30 PM, Wordcrafters celebrated the release of their StoryHelix Belonging Mixtape during the annual Eugene ArtWalk. Hosted by the Oregon WineLAB, the event included funky tunes from DJ Rortron; beautiful art and luscious plants from vendors Liandymary Jimenez Ortero of Plantchictropicals, Brandon Waite or WaiteIllustrate, and Chelsea Lovejoy; an interview booth for attendees to share their own stories with the Storyhelix podcast; a listening room for attendees to hear stories from the Belonging mixtape; and four incredible stories, poems, and songs from Daphne Singingtree, Dante Zúñiga-West, Farah Mahmoud, and Ratie D. Additionally, informational pamphlets about Wordcrafters and Storyhelix, as well as adorable miniature notebooks and awesome stickers, were available for people at the door.

StoryHelix is a project directed by Wordcrafters’ Leah Velez, with the aim of making Eugene a braver, safer, more beautiful, and more equitable place to live. Anyone who lives in Lane county and wants to share their story is able to do so by calling the Storyhelix number or submitting their story on the Storyhelix website. This party
celebrated the release of Storyhelix’s Belonging mixtape, which consolidated local Lane County people’s stories of belonging. The stories are each unique, and reflect their teller’s personality and spirit: together, all of these stories compose a many-faceted jewel that reflects the light within our community in Eugene, Oregon.

At the event Friday, attendees were able to experience this light, and this feeling of interconnectedness. Throughout the night, guests filed in and out of the WineLAB, some drinking, some chatting and laughing softly amongst themselves, some holding small children, and some standing and listening. But during each story, the room was hushed, and filled with an electric energy that affected both the storyteller and their audience. Each of the stories were so different, both in their histories and in their medium.   Singingtree told a story she learned from her elders about the history of the tobacco plant and its previous medicinal uses amongst indigenous peoples. Zúñiga-West shared an excerpt from his upcoming book, “The Unlikely Outdoorsmen,” about how he got into hunting and fishing as a child growing up in Suburban LA, and the roles his parents and grandparents played in these interests, as well as expectations and realities of the exclusion and racism present in the hunting and fishing worlds. Mahmoud shared her personal story about growing up in the Gaza Strip, moving to Turkey, and eventually moving to Eugene after being accepted to the University of Oregon. Finally, Ratie D. performed two songs from her album “Ink and Melodies,” where she sang and played the mbira, an instrument traditionally used by the Shona people of Zimbabwe.

But whether it was Dante talking about his mother and how she taught herself how to tie fishing knots so she could teach her son, or Ratie D. singing in Shona about “not giving up” while playing the mbira (an instrument, she said, which had been banned by the church when they came to Zimbabwe, because of its powerful history and tradition in bringing people together, which the church feared would empower people to rise up against them), each of these stories brought a sense of belonging and interconnectedness amongst the crowd in the WineLAB. One we hope continues to  reverberate for years to come, as more and more stories join the helix.

— Audrey Quinn (they, them)

Wordcrafters is a 501(c)(3) nonprofit organization.  Together we help writers of all levels flourish.